Can Insects Become Our Daily Bread? 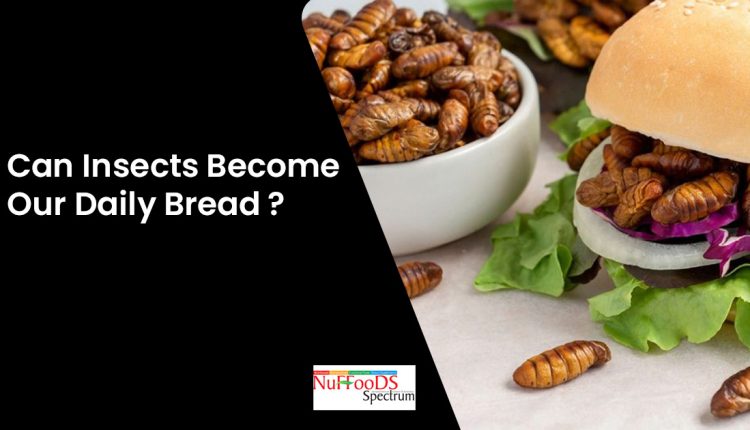 Sharing his views on the probable health risks associated with insect consumption, Dr Satyanarayana KV, Food Processing Practice Lead, Sathguru Management Consultants said, “While the microbial risks associated with edible insects can be controlled by following good hygienic practices during rearing and processing operations, the chemical contamination or bioaccumulation of heavy metals can be challenging to control and hence can pose significant risks. Insects reared on agri residues may be exposed to mycotoxins, pesticides, toxic metals, among other contaminants. Insect-based foods may pose potential allergenic risks to consumers, particularly to those who are allergic to crustaceans due to allergen cross-reactivity. There is significant overlap in allergenic proteins found in insects and those found in shellfish like crabs and prawns.”

India is the largest producer of pulses in the world, accounting for 25 per cent of the total output. However, the majority of its people are protein deficient. With February 27, 2022 marking India’s third annual Protein Day and taking ahead its mission to drive food and especially protein sufficiency in the country, do we need to explore new protein alternatives to fill this gap? Insects seem to be emerging as a viable food choice with abundant protein content, at least in some parts of the world. What will be the response to this thrust of food trend in India, only time will tell.

With an abundance of protein-rich food such as pulses, soyabeans, legumes, seeds, nuts, milk, meat, fish, and poultry, India is still facing the issue of protein deficiency. The Indian Market Research Bureau suggests that protein deficiency in Indians is more than 80 per cent, and as per the recent National Sample Survey, India has a declining per capita protein consumption in both urban and rural areas

Hyderabad-based National Institute of Nutrition (NIN) in its report ‘What India Eats’ has brought out some stark findings on food consumption patterns of Indians, giving an idea as to why the prevalence of hypertension and diabetes is high in the country. The report highlights that while Indians consume carbohydrate-rich cereals in large quantities, the consumption of high-protein and micronutrient-rich foods like pulses, legumes, fruits, vegetables and meat is much lower, which puts many Indians under the risk of lifestyle diseases.

According to ‘What India Eats’ report, a meagre five per cent of rural Indians and 18 per cent of urban populace in the country consume the recommended amount of good quality proteins.

“India has over  33 lakh children suffering from malnutrition. Despite years of efforts to tackle this malaise, the country’s child malnutrition rates are still one of the most alarming in the world. Regular protein intake is Imperative for the growth and development of children, without which, children can face multiple health issues, including fatigue, poor concentration, and lower immunity”, said Shaina Ganapathy, Head of Community Outreach, Embassy Group.

Although newer options in the form of plant-based protein foods are entering the market to address this concern, would it be enough or we need to fill our plates with more? This is where the rest of the world is moving ahead, in the direction of consuming protein-rich insects.

Global studies have revealed that the incorporation of edible insects into consumers’ dietary habits brings high-quality proteins and diverse nutrients that are beneficial for human metabolism and overall health.

For instance, new research by Maastricht University, in the Netherlands, has proved for the first time that insect protein is as beneficial as the ‘gold standard’ milk protein; both having the same performance on digestion, absorption and on the ability to stimulate muscle production.

Insects indeed offer more than proteins as they contain vitamins, minerals, fibers and healthy fatty acids, such as omega 6 and omega 3. In addition, there is increasing scientific evidence on the successful incorporation of insect-based ingredients into diverse food products, confirming the versatility of such ingredients.

In a recent development, house crickets and yellow mealworms have been approved as high protein food ingredients across a broad range of European food and beverage products, including multigrain bread rolls, dried pasta products, beer-like alcoholic beverages and chocolate confectionery.

The applicability of insect-based ingredients also extends to protein isolates for sports nutrition. US researchers at West Virginia University are currently laying the groundwork for developing efficient protein isolation techniques for crickets, locusts and silkworms.

If we sit back to reckon the insect protein market at a global level, the list would end up showing up names like Bugsolutely which offers cricket pasta in China and Thailand; GrubsUp in Australia with roasted crickets, mealworms based energy bars; Chapul, among others in the US, provides gourmet cricket bars and protein powders; Edible Inc. from South Korea besides offering dried edible insects also have a product range comprising of snacks, noodles and even health supplements made up of edible insects. Similar startups are found across the globe, be it UK, Canada, Belgium or even Japan.

“A surprising fact though it would be hard to stomach for many, more than 2 billion people around the world eat insects. Many in the food industry predict that this would become a popular trend and several international companies are in research and development for many insect protein products for human consumption. Several studies have shown that insects have a protein content of 35-60 per cent dry weight and 10-25 per cent fresh weight. Protein digestibility would be a concern as there are not enough studies to know whether humans are capable of digesting the hard exoskeleton. Without the hard exoskeleton the protein digestibility is 77-98 per cent in humans and several companies are looking into insect protein market as a viable source of protein for humans as the population is expected to reach 9 billion by 2050 through palatable processing methods”, said Sreemathy Venkatraman, Clinical Dietitian & Wellness nutritionist.

In North East India, entomophagy or the practice of eating insects is generally practiced by many communities and also a part of their culture. In Assam, a red tree ant is one of the important food items during the festival Bohag Bihu which is celebrated in the month of April. The formic acid of these insects protects from diseases like scabies, malaria, tooth aches, stomach disorders and blood pressure anomalies.

In India, a total of 255 species of edible insects are recorded so far and it is mostly practiced in the North Eastern region. However, few tribes from Tamil Nadu, Karnataka, Kerala, Odisha, Madhya Pradesh and Andaman Islands also use termites, locusts, ants and bees as food.

“Insects are generally high in crude protein and fats but their nutrient content varies between species to species and also between their different developmental phases. Many edible insects are also rich in amino acid and micro-minerals such as copper, iron, magnesium, manganese, selenium, calcium, sodium, potassium, phosphorus and zinc, as well as vitamins such as riboflavin, pantothenic acid and biotin and, in some cases folic acid, all of which are valuable in terms of human nutrition. However, the practices of eating insects are fading due to urbanisation. Therefore, popularisation of entomophagy is very much needed through awareness programmes in different places”, said Dr Rojeet Thangjam, College of Horticulture, Central Agricultural University- Imphal.

Although these nutritious factors make insects a good prospect to fulfill protein sufficiency, the benefits of this emerging food source must be weighed against all possible challenges. For instance, any food safety issues that could pose health threats to consumers. As with other foods, edible insects can also be associated with a number of food safety hazards.

Besides, other challenges such as the general absence of insect-specific regulations governing the production and trade of insects as food, issues related to upscaling the production of insects, and overcoming the negative attitude associated with insect consumption among consumers in India would take their own time in settling down. In particular, deriving and trying different approaches to motivate consumers to accept insects and insect-based food products will be a critical step in the long run.