Srirama Chaitanya Manyam, a Manager in Sathguru’s consulting practice focused on the Food Industry comments on strategies being adopted to compete in this rapidly growing market. 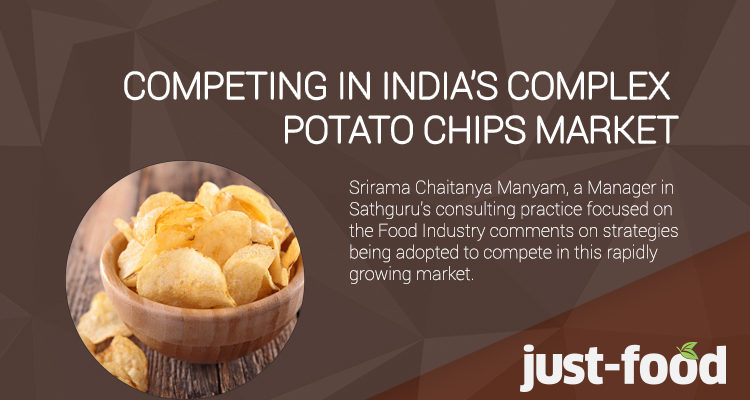 India’s appetite for potato chips is growing rapidly – with some major players building a nationwide presence to cater to rising demand, Raghavendra Verma reports.
The Indian consumer’s love of a potato chip is showing little sign of going stale.

According to data analytics firm GlobalData, India’s potato chips/crisps market was worth US$2.59bn in 2017, growing at an annual rate of 18.7%, and is expected to further expand to a value of $5.5bn in 2022.

The sale of branded chips sold by manufacturers across India is dominated by a handful of big companies – making up $900m of the segment’s total receipts, according to figures supplied by Indian ethnic food manufacturer and retailer Haldiram Snacks. The remainder is made of little-known local potato chip brands and products sold in clear plastic bags, Gaurav Mahajan, the head of marketing for Haldiram, tells just-food.

Ten years after the launch of Haldiram’s ‘Chips’ brand, the company holds a 14% share of the market for nationally branded potato chips, tussling with Balaji Wafers (at 15%) and ITC (on 16%), with all three some way behind PepsiCo, which accounts for 40% of sales, Mahajan says, citing independent, third-party market research commissioned by Haldiram to guide its sales.

There are many smaller potato chip brands, Mahajan says, but these five companies dominate sales of brands which are sold nationwide. He does not disclose the source of the data.

The growth in India’s potato chips market has been driven by rising household incomes. Unlike chocolate or sugar confectionery, where children are the main consumers, the growth in potato chips sales in India is uniform across age segments, Ankur Bisen, senior vice president at Gurgaon-based consultancy firm Technopak, says. “During a day there are multiple occasions to eat them, while meeting friends for a drink, during travelling or as an accompaniment to normal food.”

The work PepsiCo has carried out on its potato chips range in India has also looked at more affordable products and at trying to make their snacks healthier.

In 2016, PepsiCo introduced Lay’s Crispz and Lay’s Twistz potato chips – Crispz are thinner and crispier than Pepsi’s standard lines and Twistz are sold in twirl shapes – both priced at INR5 (US$0.07). Last year, meanwhile, PepsiCo announced it had cut the sodium in its Indian Magic Masala and Spanish Tomato Tango flavours by 13-15%.

Despite the innovation on flavour by some manufacturers, there is some latent conservatism among consumers, according to Shumitha Periyasamy, founder and CEO of Food Buddies, a consultancy based in Chennai.

Periyasamy says salt, pepper and chilli “are the most preferred flavours for Indians” and these are the most popular elements of chip flavours. Indeed, 60% of Haldiram’s potato chip sales are of its salty products, even though it sells potato chips in six different flavours – salted, masala, pudina, tangy tomato, cream and onion and sweet Thai chilli. It will introduce another two varieties in the next two months, Mahajan says, although he does not disclose the flavours.

Others argue India’s potato chip manufacturers have been slower to innovate in areas like texture. “The last launch with some kind of technological or functional innovation was Lay’s Maxx [in 2015],” Srirama Chaitanya Manyam, manager of the food processing and retail practice at Sathguru Management Consultants in Hyderabad, says. “They increased the serration on the chip in such a way that it gives maximum crunch.”

It could be argued that, with the category enjoying solid growth, perhaps manufacturers do not feel the need yet to commit greater investment in such innovation projects, which will take longer to complete, compared with introducing new flavours.

Despite the apparent simplicity of the potato chip, smaller players are likely to struggle to compete on quality with the major manufacturers as they increase their presence across the country. One reason is quality control. Major companies, including Haldiram, engage in contract farming to ensure an uninterrupted supply of special potato varieties that suit their products, Mahajan says.

The cost of setting up a manufacturing facility for potato chips is also a major barrier to entry for smaller companies, Girish Gupta, CEO of the New Delhi-based Foodees Group of Consultants, says.

“The machines for a manufacturing plant with an hourly capacity of 500 kg costs about $700,000 and, along with land and buildings, the total cost goes up to $1.5m,” Gupta says. “The cost of weighing and packaging machines is $285,000 and an imported slicer costs $40,000.” Haldiram’s Mahajan argues the cost of a fully automated plant was much higher, but did not specify an amount.

Nitrogen-filled packaging systems keeping potato chips dry and preventing damage to the product are also important and expensive, Gupta says. However, there are limited-capacity packaging machines available for just $500 used by little-known brands to serve smaller markets with lower-quality products, he says.

Manufacturers must also consider India’s varied geography. For higher altitude areas, companies have to adjust packaging by adding less air – a practice followed by Haldiram – to avoid packets from exploding due to low atmospheric pressure, Mahajan says. For cities such as Leh, in the Himalayas, 3,500 metres above sea-level, “we send packets with no air at all,” he explains. “To avoid breakages, potato chips have to be handled as carefully as a crate of eggs.”

At Sathguru Management Consultants, Manyam says large companies look for profit margins of between 25% and 30% when launching a potato chip product.

The cost of making a 30g pack of chips is INR10, just 25% to 30% of the consumer price. Packaging materials cost 7.5% to 10% while logistics account for 15% and the rest is the margin of the retailer and the distributor. With supply chain efficiencies, the big companies can raise profit margins to 35%, Manyam says.

On the other hand, a small company launching a product in local markets they have not tapped in the past offer a margin of up to 35% to the retailer, Manyam says.

These calculations and negotiations play an important role in the success of any product, Foodees’ Gupta argues, as India is a very price-sensitive market. The packaging alone for Pringles – a pack of which costs $1.50 – costs $0.15, he adds, which could limit the sales of the Kellogg-owned brand in the country.

Sumit Mathur, director of marketing for Kellogg’s operations across south Asia, tells just-food sales of Pringles have doubled over the past two years and stresses how the company has “amplified the brand … via various marketing initiatives.”

Mathur says Pringles caters to consumers who look beyond price to look for “differentiated value propositions that make products worth paying more for”, with demand, “centred around social occasions [and] personalising experiences”. With Indians keen on “pure-play snacking”, Mathur only “foresees growth for a quality brand like Pringles”.

Overall, potato chips enjoy a huge advantage over other snacks in the Indian market, Gupta says, as they have become the category driver at retail level. “If a shop does not offer potato chips, its sales suffer,” he asserts. “With chips on the shelves, the sales of other snacking products just doubles.”

Indian Pharma Sector: What Next After Gottlieb?