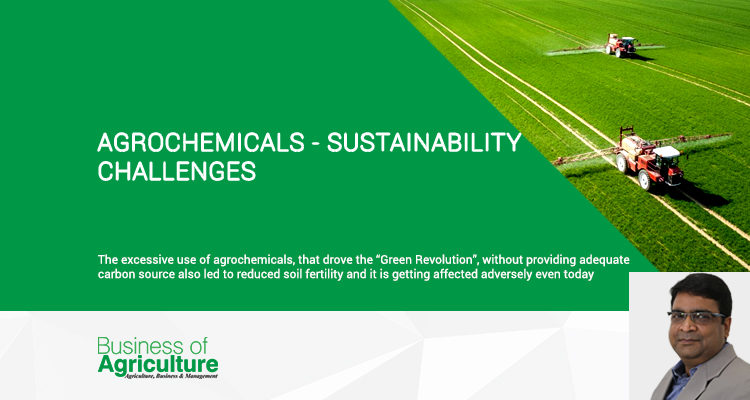 The shift of agriculture from subsistence agriculture to use of agrochemicals in mid-20thcentury was a mixed-blessing and not a “curse-in-disguise” for humanity. The agrochemicals refer to refer to inorganic fertilizers and pesticides. A substantial increase in the quantity of food produced was observed however, the changes in nutritional quality was also felt and complained by older generations. The excessive use of agrochemicals without providing adequate carbon source that drove the “Green Revolution” also led to reduced soil fertility which is getting affected adversely even today – we are losing arable land at the rate of 10 million ha year‑1 globally[i]) and agrochemicals have played a major role in this. There is evidence that a plateau has been reachedin global efforts to improve the crop yield through agro-chemicals that also had an adverse effect on beneficial microorganism and earthworms that were useful in renewing the natural fertility of soil.

Higher uses of agrochemicals also require frequent irrigation and have already put severe stress on ground and surface waters over the years, which is expected to affect at least 52 % global population by 2050[ii]. Widespread use of fertilizers &chemical pesticides is now a necessity for growth of high yielding hybrids. Overuse of pesticides also led to development of pest resistance against several economically important crop pests. The practices that became vogue in mid-20th century raised sustainability issues when it comes to agriculture itself and humans, cattle and environment including soil, water and air[iii]. According to United Nation Environment Program (UNEP) and the World Health Organization (WHO) nearly 3 million people suffer from ‘acute pesticide poisoning’ and approximately 10- 20,000 people die every year from it in the developing countries[iv]

In the last decade of 20th century and beyond, global community has woken up to the harmful effects of overuse of agrochemicals and are looking for “economically viable, socially safe & environmentally sustainable” alternatives to boost farm productivity to feed the growing population that will become 9.8 billion in 2050[v]. The advent of several technologies in the agricultural space like gene editing, information and communication tools, virtual and simulation chemistry, microorganisms, precision agriculture, traits for fertilizer use efficiency and their integration to boost farm productivity will be able to mitigate the sustainability challenges caused by agrichemicals usage over a half decade and more.

The commercialization of microbial products such as biostimulants, biopesticides, plant growth promoters etc. by companies by either collaborating with those working on biologicals or investing in the in-house R&D for product development and commercialization is increasing and will mitigate environmental and health concerns. The practices of Integrated Pest Management (IPM), Integrated Crop Management (ICM) and Intergrade Nutrient Management(INM)focuses on rational use of pesticides, nutrients and efficient cropping cycle. The adoption of IPM, INM and ICM are efforts by stakeholders in agrochemical industry to make agriculture sustainable.

Additionally, the technological advances in genetic engineering (GE) that can introduce traits of interest be it drought and salinity tolerance, increasing nitrogen and water use efficiency or resistance to different crop pests in crops with precision are the efforts in the right direction. In 2017, seventeen million farmers form 24 countries in 189.8 million hectares[vi]planted GE crops, majority of them focused on disease resistant traits thereby reducing the use of agrochemicals. The area under GE crops is expected to increase further and will help to optimize the use of agrochemicals in the long run leading to positive impact on the human, livestock and environmental health. The thrust on use of precision technologies either for detection of soil, water, nutrient stresses or identification of pests & diseases, assessing plant growth and real time recommendations coupled with novel delivery mechanisms of agrochemicals will over the long term make their use sustainable.

Sustainability requires that the crop productivity be increased or at least maintained at current levels over time. Will it possible for these integrated technologies and approaches being adopted to be profitable and highly productive through the economic use of water, energy and nutrient inputs? The large-scale mixed farming systems that are less reliant on external supplies of energy, nutrients and fodder are already in practice in developed countries and will slowly but surely be used in developing countries in near future.

The availability of plethora of technologies for agriculture is a boon for farmers globally however their access and adoption is a factor of safety conscious consumers and favorable regulatory regimes that lead to discovery, development and commercialization of novel technologies in agriculture sector. A favorable regulatory environment, like in North America, not only leads to improved access to new products and technologies that will shift the current farming practices to more sustainable ones in agriculture in general and particularly in agrochemicals sector, the key inputs for high crop productivity. This also needs to be linked to capacity development for efficient use of technologies where governments and private players need to play a major role to make the use of agrochemicals sustainable.

[i] Ten million hectares of arable land worldwide are ‘lost’ every year. https://www.umweltbundesamt.de/en/press/pressinformation/ten-million-hectares-of-arable-land-worldwide-are

[ii] Water Stress to Affect 52% of World’s Population by 2050. https://waterfootprint.org/en/about-us/news/news/water-stress-affect-52-worlds-population-2050/

Connect with Author at: E-mail agribusiness@sathguru.com

First Published in: Business of Agriculture