Challenges in addressing the problem of food allergens 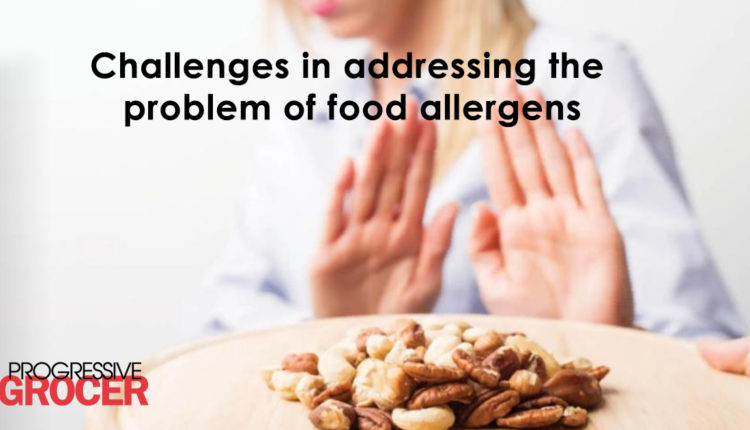 There has been significant increase in food allergy incidents in the past few decades and food allergies are becoming an important public health concern and a major food safety issue globally.Public health systems, food safety authorities and the food industry can play a key role in helping individuals with certain food allergies avoid exposure to such food. Food allergens management is becoming very important in food industry globally and several national regulations are addressing the allergen management by putting regulations in place for food manufacturers.The confusion between food allergies and food intolerances and also lack of awareness on the type of allergies a consumer experiences creates a challenge in addressing the problem. Recognizing a true food allergy that a consumer is experiencing is critical to recommending avoidance of a particular food, since some individuals have very low threshold levels for these foods.

Adverse food reactions can be defined as any abnormal reaction caused by the ingestion of food.Adverse reactions to foods can be broadly divided in to immune (IgE) mediated food allergies or non-immune (non-IgE) mediated food intolerances. Food allergies and food intolerances are different from other foodborne diseases caused by foodborne pathogens that cause illness in humans by either infection or intoxication. Foodborne infections are caused by consuming live pathogens like bacteria, molds, viruses, and parasites that grow in the body, usually inthe intestinal tract, and cause illness.Foodborne intoxications are caused by consuming toxins produced by certain bacteria like Staphylococcus aureus after they have grown in the food and ingestion of chemical substances like aflatoxins produced by certain molds. The foodborne infections and intoxications can affect all the individuals who consume the contaminated food, but the degree of susceptibility may vary between individuals. In contrast to foodborne infections and intoxications, food allergies and food intolerancescause adverse reactionsin only certain individuals in the population and the majority of the population can consume that food without any adverse reactions. A classification scheme for different types of adverse reactions to foods is provided in Figure 1.

Food allergyis defined as ‘‘an adverse health effect arising from a specific immuneresponse that occurs reproducibly on exposure to a givenfood, usually a naturally occurring protein’’.Depending on the involvement of antibody called immunoglobulin E (IgE), the immuneresponse in food allergy can be classified into IgE-mediated,non-IgE-mediated or a mixture of both[1] (Figure 1). In IgE-mediated response, symptoms of food allergy usually start within minutesof exposure (immediate hypersensitivity reactions)to the trigger food and occur within few hours. Non-IgE-mediated food allergy (delayed hypersensitivity reactions) are cell-mediated reactions with symptoms developing 48-72 hours after ingestion of the trigger food.

Figure 1. A classification scheme for different types of adverse reactions to foods 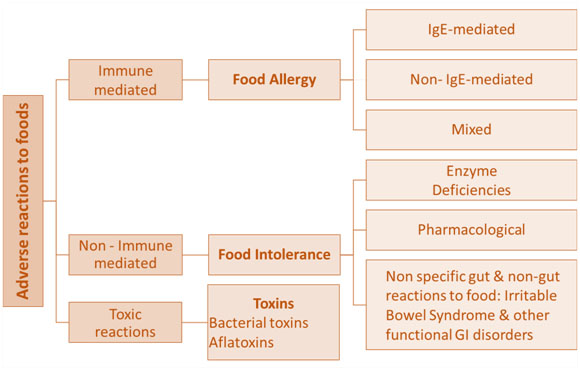 Food intolerance is defined as “nonimmune reactions that includemetabolic, toxic, pharmacologic, and undefined mechanisms”. The best example of reaction due to enzyme deficiency is lactose intolerance caused by a deficiency of lactase enzyme in affected individuals; leading to an intolerance to milk and milk products that contain lactose. Individuals can also be sensitive to the pharmacological effect of some food ingredients like caffeine, biogenic aminesor certain food additives.

While food allergies can be life-threatening, food intolerances may pose lesser risk with functional disorders. Thepathophysiological differences between food allergy and food intolerance result in different diagnostic strategies and therapeutic options. Hence, getting an accurate diagnosis becomes critical for appropriate medication required to manage the condition including avoidance of trigger food.

A trace amount of protein/ allergen can trigger different symptoms in different individuals affecting different systems in the body. Theseverity of the response may depend on the individual sensitivity and the amount of the protein/ allergen consumed. Symptoms can include any combinationof local oral, dermatological, gastrointestinal and respiratory symptoms. The mostsevere reactions have systemic effects leading to a potentiallyfatal anaphylaxis.

The manifestation of food allergy isinfluenced by genetics (G), environment (E), and G x E interactions. Several risk factorscontribute to food allergysuch as sex, race/ethnicity, and genetics[2].Some food allergies may be outgrownwhile some persist throughout life. Allergies that may be outgrowninchildhood include milk, egg, wheat andsoy. Other allergies like peanut, tree nut, fish, and shellfish are typically persistent for life.

A short list offoods account for most of the serious disease burden,namely peanut, tree nuts, fish, shellfish, egg, milk, wheat, soy,and seeds2. Food allergies are common with up to 10% of population being affected. The prevalence of food allergies has increased in the last 2 to 3 decades, with more prevalence in persons in industrialized/westernized regions, and more commonin children compared with adults. Peanut allergies are very common in the West, but are relatively rare in Asia. Shellfish allergies are more common in Asia than in the USA.Very limited data is available regarding the prevalence of food sensitization andprobable food allergy among general population in India.The first major study (EuroPrevall-INCO study) evaluated the prevalence of sensitization and food allergy to 24 common foods amongadults from general population in Karnataka.[3] A high level of sensitization (26.5%) was observed for most of the foodsin the general population, higher than that observed among adults in Europe. Shrimp and sesame seed were themost common sensitizers at 13% each, whereas foods mostcommonly associated with clinical symptoms of allergy were apple, fish,banana, cow’s milk, and melon.Participants in Bangalore had higher rates of sensitizationthan those in Mysore, reflective of the westernization of Bangalore in recent years. In contrast to the high rates ofsensitization, the prevalence of food allergy was very low at 1.2%,with cow’s milk and apple being the most common allergens. Themean total IgE level from participants in India was higher thanthose observed in Europe. This is speculated to reflect the effect of significant exposure to air pollution, insect bites, andparasitic infections on IgE production.The reasons for the Indian populationwith higher levels of food-specific IgE than most Westerncountries, but lower prevalence of probable food allergy, remain unclear and needs to be investigated further.

Diagnosis and treatment of food allergies

Getting an accurate diagnosis is key that will allow appropriate medication required to manage the condition including avoidance of trigger food.The elimination of any food from the diet is difficult and can cause a nutritional deficiency, hence it is very important that any suspected reaction to a food is investigated medically. Individuals often identify food as the cause of the symptoms when it is not or identify the wrong food or too many foods. This can lead to unnecessary avoidance of diets. Proper diagnosis is required particularly in cases of life-threatening reactions to foods.

The most common form of treatment is the avoidance of the food or food ingredient that triggers the adverse reaction. The ability to practiceavoidance depends on factors outside the control of the individuals. Proper labeling of food products along with strict monitoringof labels is required for avoiding specific allergens.In order to fully assess their own products, food manufacturersmust have accurate information about their ingredients andalso understand their processing conditions related to allergen cross contactopportunities. The results of mislabeling, untrained workers and manufacturing processes with poor implementation of Good Manufacturing Practices (GMPs) can be lethal for consumers. Food allergens management is becoming very important in food industry globally and several national regulations are addressing the allergen management by putting regulations in place for food manufacturers.

There is a need to create awareness among the consumers about adverse reactions to food and the distinction between food allergies and intolerances that are often confused by individuals. The recent study indicating high prevalenceof sensitization to specific foods in India is a cause for concern and warrants more studies to understand the prevalence of sensitivities and allergies in the country. The reasons for the identified disassociation of sensitizationand food allergies also need to be ascertained inthe general population. Food allergen labelling is an important mechanism to reduce risk of exposure forindividuals with food allergies. The draft FSSAI regulations prescribe the provision for labelling of foodallergens and hopefully the final regulations will be notified soon. There is a great need for awareness for the consumer as well as trainingfor the food business operators and food handlersabout the allergens, their health implications and allergenmanagement to make food safe for everyone.

Author:
Dr. K.V. Satyanarayana is Associate Vice President at Sathguru Management Consultantsand leads the Food Processing andRetail practice. He is also an FSPCA Trainer of Trainer for Preventive Controls of Human Foods. He can be reached at satyanarayanak@sathguru.com.

Nutraceuticals move up the value chain: From herbal extracts to proprietary ingredients