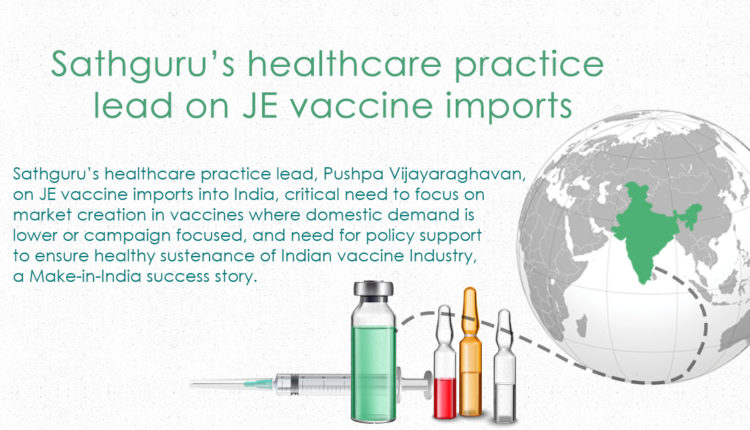 The first Japanese Encephalitis vaccine was launched in 2012 by Indian vaccine maker Biological E. The vaccine, branded by the name Jeev, is to be delivered in two doses with a four-week gap.

Japanese Encephalitis is a viral disease that infects animals and humans. It is transmitted by mosquitoes and causes inflammation of the membranes around the brain. World Health Organisation describes that the infections are mild (fever and headache) or without apparent symptoms, but approximately 1 in 250 infections results in severe clinical illness.

The incubation period is between 4-14 days. In children, gastrointestinal pain and vomiting may be the dominant initial symptoms. Severe disease is characterized by rapid onset of high fever, headache, neck stiffness, disorientation, coma, seizures, spastic paralysis and ultimately death. The case-fatality rate can be as high as 30% among those with disease symptoms.

Of those who survive, 20%–30% suffer permanent intellectual, behavioural or neurological sequel such as paralysis, recurrent seizures or the inability to speak.

WHO prequalified the eligibility criteria for Jeev, thereby allowing its supply in most markets, and in a year’s time, it hit the markets.

This vaccine was a public-private collaborative effort, jointly developed by scientists at the Indian Council of Medical Research (ICMR), the National Institute of Virology (NIV) and Bharat Biotech International.

In fact, when the vaccine was launched, government officials claimed that the vaccine would potentially reduce India’s dependence on Chinese imports. Till Jeeva was launched, the Indian government was buying the live attenuated SA14-14-2 vaccine manufactured by state-run Chengdu Institute of Biological Products (CDIBP).

Even after Jeev hit the markets, the Indian government continued to import JE vaccines from CDIBP through public sector undertaking HLL Lifecare.

“The Chinese company which built huge capacities has been dumping the vaccine 20-30 cents to a dollar in India per dose, we could not compete at that price,” a top executive from one of the vaccine companies mentioned in the story told Moneycontrol.com, adding, “The vaccines made by Indian companies are much safer inactivated vaccine based on cell-culture, where a dead strain is used, compared to Chinese which uses live-attenuated or live virus.”

“With Indian government not buying our vaccines, we had to survive on export orders which are infrequent,” the executive added. “JE is a campaign vaccination and so is not a part of the national immunisation programme. It is covered under public immunisation confined to the 181 endemic districts in the country,” said Pushpa Vijayraghavan, Director of Sathguru Management Consultants.

“The problem in JE vaccine is that there is lack of substantial market creation because campaign vaccine volume is not very high, the markets are less stable and less attractive. It is possible the Chinese may have substantial economies of scale, cross-subsidising the vaccine, or could it be a case of stockpiling to respond immediately to demand,” Vijayraghavan added.

Push for Make in India

The executive further told Moneycontrol.com that government is finally relented to buy from Indian companies, keeping the Chinese out. This came after several representations to the government presenting their case on the basis of science and safety.

“We need around 120-135 days to initiate supplies, it takes 45 days to make bulk vaccine, 45 days for internal testing and another 30-45 days testing at Central Research Institute (CRI), Kasauli, Himachal Pradesh, before the vaccine is ready to be used for immunisation,” the above executive said.

“The government will have to focus on creating and maintaining attractive markets so that the industry participants can be sustained,” Vijayraghavan added.