If you have heard of the trending buzzword #blockchain, I am sure your thoughts would have been intuitively directed to bitcoin and other cryptocurrencies. As a distributed and collective public ledger system, blockchain is perhaps most often associated with fin-tech. But what if you were toldthis technology has the potential to make every transaction in the agri-supply chain transparent, traceable, and verifiable without any third-party oversight?
Let us take a look at the following scenarios:

For each case, it is hypothesized that blockchain technology would have facilitated traceability across the entire process, expediting real-time corrective actions, and perhaps a priori mitigation of its occurrence. Given the technology’s vast potential, this has been a trending topic since its inception. So what does a #blockchain entail?

Simply put, blockchain is a platform technology managed by a collective of computers, with no centralized authority to approve transactions. All entries on this system offer near-instant visibility to participants in the supply chain. Any entry in this ledger can only be changed after consensus is reached among participants. Once committed, no participant can alter past transactions. In an integrated world, global supply chains would function as an intricate web of inter-connections for optimizing supply and demand. Differences in regulatory frameworks across nations also complicate their functioning.

According to an IFC report, blockchains have the potential to integrate supply chain transactions in real-time, as well as identify and audit the origin of goods in every link of the chain. When applied to the food supply chain, critical product information such as origin and expiration dates, batch numbers, processing data, storage temperatures, and shipping details get digitized and entered into the blockchain at every step along the chain. Using smart-phones to read QR codes to get details on the source of meat, including an animal’s date of birth, usage of antibiotics, vaccinations, livestock harvest, dispatch and shipping can easily be traced.

Increasingly, companies are now developing infrastructure to leverage blockchain to make supply chains more robust, efficient, and traceable. Brands like Unilever and Sainsbury have partnered with financial investors like Barclays, BNP Paribas, and Standard Chartered, to conduct one-year pilot project on how blockchain technology can financially reward and promote sustainable practices for Malawian tea farmers. This trial system would record price, produce and production information for over 10,000 tea farmers.

In early 2017, food giants like Wal-Mart, Nestlé, and Unilever (among others) collaborated with IBM to apply blockchains to global food supply chains. On this platform, IBM will offer Blockchain-as-a-Service (BaaS) to build and participate in a private blockchain network spanning the entire global food supply chain. Food growers, distributors, suppliers, processors, retailers, regulators, and consumers themselves will have access to data on origin and transaction history of food products worldwide. According to IBM, investing in such a platform would enhance traceability and accountability among stakeholders. It was highlighted in a Forbes Report that by conventional methods Walmart took in 6 days, 18 hours, and 26 minutes to trace the exact farm location of mangoes. Using blockchain, the same task was completed in under 3 second.

Start-ups have also been very active in this space, exploring blockchain applications beyond fin-tech . Their business models address the gap of growing consumer concerns with respect to food contamination, food loss, quality management, and farmer compensation. 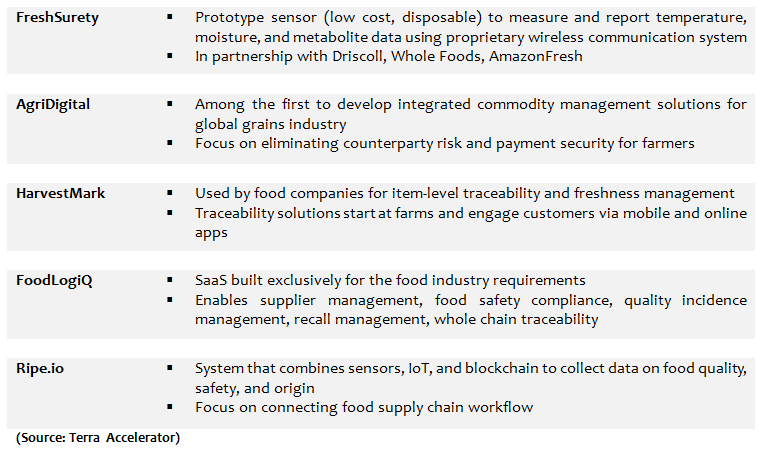 Challenges in implementing blockchains
Although blockchain technology offers tremendous potential in agri-supply chains, it is far from being a panacea for issues affecting this sector.
One ofthe early roadblocks in blockchain adoption is a need for infrastructural investments in developing countries (with higher incidences of unsafe agri and food supply chains), wanting for financial support.
There are also concerns among stakeholders with respect to achieving balance between confidentiality and transparency. Due to sensitivity of information in the agri-sector, manner in which the technology would be deployed may become problematic for companies.
Another big challenge that blockchain technology will need to overcome is the need for participation. In order for it to work, all parties involved must adopt the technology. This may be a challenge in food supply chain, as not all parties are equal – some exercise more power than others.However, once the challenge of mass participations is overcome, and benefits of a more transparent supply chain manifest themselves, early adopters will be remain at a competitive advantage compared to laggards .

Sheetal is an Agribusiness Consultant in the Life Sciences Advisory Group at Sathguru Management Consultants. She has a PhD from IIT Bombay in Technology and Intellectual Property Management. Her focus is on analyzing business and technology strategies, as well as IP strategies of agri-input companies (agri-biotech, seeds, & crop protection). She has hands-on experience in IP analytics, patinformatics, designing patent and PVP landscapes, and IP auditing. Her domain knowledge in technology transfer, licensing, and commercialization brings a unique value proposition to the team.