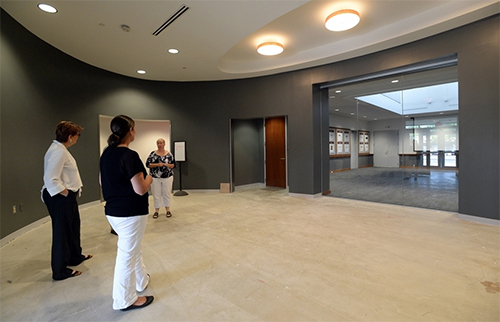 Groton — If you build it out, they will come.

That’s a belief espoused by Susan Froshauer, chief executive of the statewide bioscience network that has overseen work over the past two years at the CURE Innovation Commons, a newly opened incubator space carved out of a 22,000-square-foot former Pfizer Inc. building.

“We held off on a lot of showings of the building until the renovations were done,” Froshauer said. “We’re very proud of what we’ve accomplished.”

Pfizer in April 2014 donated its vacant Building 286 to CURE in an effort to bolster Connecticut’s bioscience community, and the state kicked in $4.2 million to fund its conversion into an incubator.

Since then, the 2-acre space has been separated from the main Pfizer campus with metal fencing.

The donation occurred not long after Pfizer spurned state efforts to save its massive former research and development center known as Building 118, a 750,000-square-foot space it demolished three years ago despite a developer stepping forward with an offer officials saw as promising.

The move followed the sale of Pfizer’s worldwide research and development center in New London and the subsequent layoffs of 1,100 workers in Groton.

Officials hailed the CURE initiative at the time, with Gov. Dannel P. Malloy saying the incubator would “spur the discovery, research and development of cutting-edge new medicines.”

“Our mission is to be a haven for former Pfizer employees that want to start companies,” Froshauer said.

So far, though, GestVision is the only bioscience company in the group, focusing on commercializing a diagnostic test for a condition known as preeclampsia that can occur in pregnancy, and it is moving from the Yale Science Park.

The other two firms are related to life sciences but not directly involved in scientific research.

Froshauer aid she expects interest in the building to pick up now that it officially has opened.

“Pretty soon, things will be filling up,” she said. “Hopefully, we can attract Rhode Island and Boston companies and investors.”

Froshauer added that she likes having a wide range of expertise at The Commons.

She mentioned information technology companies, marine science researchers and medical device manufacturers as part of the incubation mix planned for the space, and in the next few months she expects to lure the A-100 tech incubation group based in New Haven to open the first branch of its kind in eastern Connecticut.

Several other mentoring groups, including SecTech, Connecticut Innovations and Crossroads Venture Group, will be offering a regular schedule of advisory services to Commons residents.

Other advisers include CBTG Technology Group for IT services; Wiggin and Dana for legal help in company formation; Fiondella, Milone & LaSaracina LLP for accounting, and Wilson Sansini Goodrich & Rosati for startup and venture-capital guidance.

UPS has equipped The Commons’ mailroom at the front of the building and is offering special pricing for member companies shipping items.

“Companies can come in and get going,” Froshauer said. “They don’t have to figure it out themselves. … It’s part of the CURE network.”

In a showing of the new space about a week after CURE opened The Commons up to nearly 300 invited guests during its first major event, Froshauer said a few renovations still need to be completed — most notably the front entrance flooring, which is expected to be finished next week.

But the work largely is done.

The skylit space includes a kitchen area around which social events, such as pizza parties and coffee meetings, will be centered.

A dozen laboratories range from about 400 to nearly 1,000 square feet of space and are suitable for a wide range of research, including both chemical and biological processes.

One of the labs has been set aside for high school students to be able to drop by and see scientists at work while also trying their own experiments.

The hallways are replete with shelves and spaces where scientists can hang out exploring new ideas with their colleagues, and there are co-working spaces as well as private offices and video conference spaces throughout.

CURE hopes enough activity will be swirling around to attract a range of talents related to science and technology to congregate at The Commons.

Already, the 4-year-old Southeastern Connecticut Entrepreneur Network has agreed to move its regular meetings from Muddy Waters Cafe in New London to the new incubator space.

“We designed the hallways for networking and to be colorful and bright,” Froshauer said. “We brought the colors of the natural world into this building.”

The colors suggest natural substances found by early settlers of the area, including granite and copper.

Furniture designs and layout were informed by Froshauer’s trips to San Francisco, Boston and The Grove incubator space in New Haven, she said, and many of the elements are flexible, including lab work benches that can be reconfigured in various ways and a movable sofa in the common area.

The space includes a water-purification system, shared-equipment room and completely updated mechanicals, not to mention microscopes, centrifuges, safety hoods and other items necessary for bioscience research, some of which have been donated by Connecticut companies.

Freezers can cool specimens to as low as minus-120 degrees, and the space is fully equipped for tissue cultures and bacterial studies, Froshauer said.

“The labs could be used for new drug discovery projects or the highest art of synthetic or organic chemistry,” Froshauer said.

Soon, Froshauer will be seeking donations of photos, paintings and even sculptures to help add to the cool, creative vibe of The Commons.

It’s a vibe that she is consciously building to differentiate The Commons from the University of Connecticut’s Technology Incubation Programs in Farmington, Storrs and Avery Point — spaces that she said charge about the same as The Commons.

“I think this is going to serve a different purpose,” she said. “It’s going to be a real community space, and it’s going to be flexible. … We’re going to accommodate as best as possible whatever a company needs.”