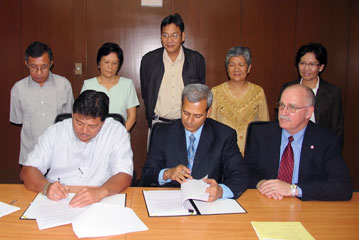 The technology transfer agreement for Fruit and Shoot Borer Resistant (FSBR) eggplant was signed on January 30, 2006 at the Office of the Chancellor, University of Philippines, Los Banos (UPLB) to facilitate the commercialization of the Bt Eggplant varieties in Philippines.

The agreement between the Maharashtra Hybrid Seed Company (Mahyco), UPLB and Sathguru Management Consultants will help expedite the transfer of seeds of the crosses produced between the Mahyco Bt parental line and selected Philippine varieties.

Basix Elects Sathguru as the Best Collaborative Partner of the Decade