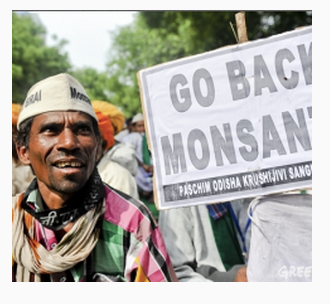 Indian public researchers have been deploying investments in genetic engineering of crops over the last 15 years. Beyond countries in the Americas and Northern Europe, Indian public research has the largest number of scientists who are well trained in crop improvement, safety assessment and deployment in farmer fields.

The Indian private sector has demonstrated that these crop improvement efforts can be affordable, scientific and regulatory compliant in accordance with the best regulatory protocols adopted across the world. This was an unprecedented national effort. The use of Bt-cotton in India has grown exponentially since its introduction for than a decade ago, leapfrogging India from a laggard to a world leader. India recently became the number one global exporter of cotton and the second largest cotton producer in the world.

India has also shown the way for public private partnership with some of the discovered genes licensed by Indian research bodies to Indian private sector to develop vegetable and grain crops. The private sector, mirroring the success in drug and pharmaceutical developments, is generating affordable technologies for smart crop improvement and bringing these traits to the farmers on their own or in partnership with global entities, thereby providing affordable seeds not only to India but also to other developing countries.

Indian cottonseeds go far and wide. We see them grown in South Asia and South East Asian countries (such as Burma) although these countries have not officially approved these products. The fact is that proven technology, even when not officially approved, are embraced by needy farmers for their own survival and attempts to block their acceptance will only result in their uncontrolled, illegal adoption to the detriment of the nation. This is what is happening today in China, where the Bt rice is widely adopted but the government is in a denial mode due to protests and an uncertain policy framework.

The dramatic success of GM crops has spawned a counter reaction. The efforts of foreign funded non government organizations (NGOs) to create obstacles for Indian public research organizations and the Indian private sector commenced about 14 years ago when Bt cotton was still under regulatory validation. During the last 8 years, several Indian public sector research organizations, indigenous industry players and joint ventures with majority Indian holding have developed a number of biotechnology derived seeds that can bring enormous advantage to Indian agriculture, specifically to small and marginal farmers and consumers. But the effort is threatened by vigorous efforts of a handful of powerful, heavily funded NGOs, which are based in Western developed countries. Anti-GMO activist organizations that appear to be indigenous are heavily funded by western advocacy groups.

The escalating protests over the last five years have turned the Indian clock in agriculture research back by more than a decade. The issue is compounded by India’s shoddy and politicized regulatory system. This professional science rejectionist movement can only be overcome with smart articulation of facts to the public by scientists. In countries that have embraced science, innovations have catalyzed the people and brought huge benefits.

5 Questions with Alan Levinovitz, author of The Gluten Lie