Life…The Greatest Gift of All 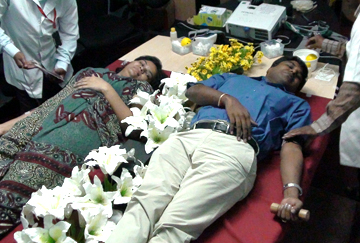 The only gift is a portion of thyself. – Ralph Waldo Emerson

What greater gift can one give than the gift of life? Nothing…and this was so amply proven by the enthusiasm with which the men and women of Sathguru volunteered to donate blood that would one day save the life of an absolute stranger.

Sathguru’s CSR initiative, Sankalp organized its annual blood donation camp in association with the Lions Club of Hyderabad East Bhanji Kheraj Blood Bank at the Sathguru premises, under the able guidance of Ms. Hemalatha, Director of Sathguru. K Ragunathan, Director, Sathguru Management Consultants, inaugurated the camp by volunteering to be the first in the long line of donors, who did not come alone. They were accompanied by their spouses, neighbours, friends and relatives. The strong bond that Sathguru fosters was amply demonstrated by the fact that among the donors were former employees and clients of Sathguru.

For many at Sathguru, this was not something new as they were already listed as active blood donors always on call and ever willing to give of the “sacred scarlet tree” that grow within them. In fact there were those who were turned away at the camp because they had donated blood some weeks earlier.

The camp continued well into the afternoon as the team of professional medical attendants, aided by an enthusiastic Sankalp team made all necessary arrangements to ensure the safety and comfort of the donors. The camp amply demonstrated Sathguru’s own commitment to the community reflected in its development projects involving food agriculture and health and also the various educational and aid initiatives organized by it under the aegis of Sankalp.

The Sankalp team wishes to thank all those who worked towards making the blood donation drive a grand success and seeks your continued support in all its other initiatives.