“India needs to build awareness around one health”

In an exclusive conversation with the BioVoice, Mr K Vijayraghavan, Chairman, Sathguru Management Consultants shared his insights on the importance of One Health and various aspects related to it 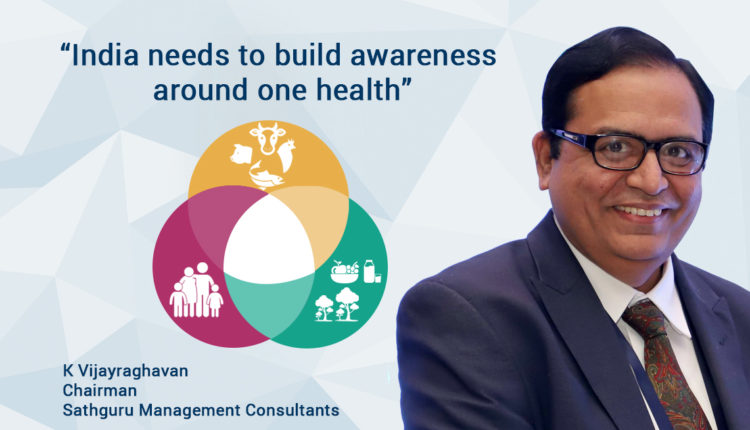 The “One Health Concept” is based on the fact that there are various factors connected to each other which determine the quality of human and animal health. In this backdrop, an inaugural summit on ‘One Health’, organized by Cornell Sathguru Foundation for Development was recently held at New Delhi where stakeholders discussed the interconnectedness of human health, animal health, food and environment.

In an exclusive face to face conversation with the BioVoice, Mr K Vijayraghavan, Chairman, Sathguru Management Consultants shared his insights on the importance of ‘One Health’ and various aspects related to it. Read on:

Please tell us about the importance of organizing the first ‘One Health Summit’ by Cornell SathGuru Foundation for Development in India? What are the relevance and future?

India is a very large ecosystem where we have world’s largest cattle population and the country is among top five nations in poultry population. We have several small women entrepreneurs in the area beside there is large agricultural cropping system run by small farmers.

These are the co-living ecosystem where animals are producing food and feed for us, farmers producing crops for us and so on. Hence, there is tremendous interconnectivity between farm, animals, and humans. If it moves from one system to another, it has implications. These are what we call zoonotic diseases. You have seen H1N1 creating havoc in the world followed by the culling of animals and quarantine of humans. So, the question is how do we prevent the spread of disease from one living organism to the other. The second thing is when you look at the remedy especially the drug applications, antibiotics become big solutions to fight bacteria. So, you apply them in all systems I.e human, plant and animal systems. So, there is a whole accumulation of antibiotics in all systems. And there is resistance buildup that comes with that.

Therefore, you need to judiciously apply these solutions across the spectrum of living organisms and in some way make sure that regulations are adhered to. The second thing is that administration of solution by doctors, veterinarians advise are adhered to. This why the ecosystem is so interconnected from the applicable perspective, company’s perspective They need to be concerned about the judicious recommendations of these. The industry is actually talking about it. Regulatory of pharma, food, agriculture need to act in tandem so that interconnections are adhered to. And of course, as a community, we need to be aware of precautions to take as animals can cause problems whereas also protect our pet animals who are life partners. Taking care of their and our health is important.

How aware is our population about the one health and interconnectivity of various systems when it comes to managing health?

It is very low as of now in India. The intellectual class including academics, researchers, and people involved in veterinary are finding solutions for diseases and are thus aware to a greater extent than commoners. Let us take an example of Rabies injection which is mostly administered to humans than dogs. The dogs itself are not protected as it is not considered a priority. The affordability plays a part too. The street dogs are not sterilized due to a variety of reasons. There have to be welfare measures to sterilize them followed by vaccination protection. It, therefore, poses challenges to human health.

The awareness is also low because the systems are not integrated. The farm workers is a carrier of spores but he is not aware of the fact. He goes from one farm to other spreading the spores into the human system. However, these are isolated cases. At the same time, when the pandemic situation arises, the disaster management comes in. We have seen how people were quarantined at the airports in case of Ebola outbreak. While currently the steps are only taken in case of a pandemic, the need for awareness and continuous dissemination of knowledge is required.

We are at the risk of acquiring foodborne pathogens but India is yet to have any surveillance system to check it. We are yet to know the exact number of people dying each year because of it. It is a known fact that vegetables are washed at riversides and thus contain micro-organisms. These are basically microbial risks which lead to the build-up of antimicrobial drug resistance in the human body. There is a study by the ICMR where it talks about several dugs that have already developed resistance to 80-90 percent level. The challenge we have is the food safety awareness. People don’t know what is unsafe food and its impact on their health.

Then you have the question of food safety vs cheap/junk food?

Absolutely, we can’t have junk or unsafe food because it is cheap. The health has to be on top priority yet that doesn’t seem to be the case at a broader level. For example, how do the vendors wash vegetables in a city like Delhi? Few will use the Yamuna river water to wash it while being unaware of the toxicity levels and microbial dangers. The same vegetables in form of raw salad are used in both five-star hotels, street food carts or common households. The farm output should be free of contamination. The biggest challenge, therefore, is surveillance.
The regulations can play an important role in surveillance.

Can we have a new uniform committee with representatives from various regulatory agencies in wake of a joint challenge?

Regulation is a multi-dimensional science. When you look at the efficacy of a drug in an animal, human child or adult, we think of safety, affordability, and access too. So, it is a multi-dimensional validation as in India, we have multiple agencies. Drug Controller looks at human health/animal products. Department of Biotechnology looks at biologically derived products. These could be recombinant, GM, biosimilars, biologics etc. The ICAR takes care of farm applications and other issues related to agriculture. I think these regulatory bodies need the specific expertise/subject matter experts to engage the stakeholders well.

Then there are converging elements. Food groups, pharma groups, animal groups etc converge where the cross expertise elements come to the picture. We heard the regulators talking about setting up of committees. That is where we see the European Union going. They create these inter-disciplinary task forces and bring together different perspectives.

My perspective on an issue/product or regulation as a chemist would be slightly different from a biologist’s perspective. That is where the difference lies.

Have your expectations from the one health summit been met? What should be the future course of action?

We certainly had the convergence of multi-stakeholder for the first time. People understand that the contiguous approaches for implementing some of these will take time. From government side too, the representatives have stated that they are in process of making things happen. May be the pace of activities needs to be accelerated. We will continue to pursue the forward-looking activities that were discussed at the Summit.

Research Priorities, Policy Frameworks & Practices in Food Safety : The concept of One Health

Dr. Vijay Paranjape from the Ag team at Sathguru in an interview with Federation of…