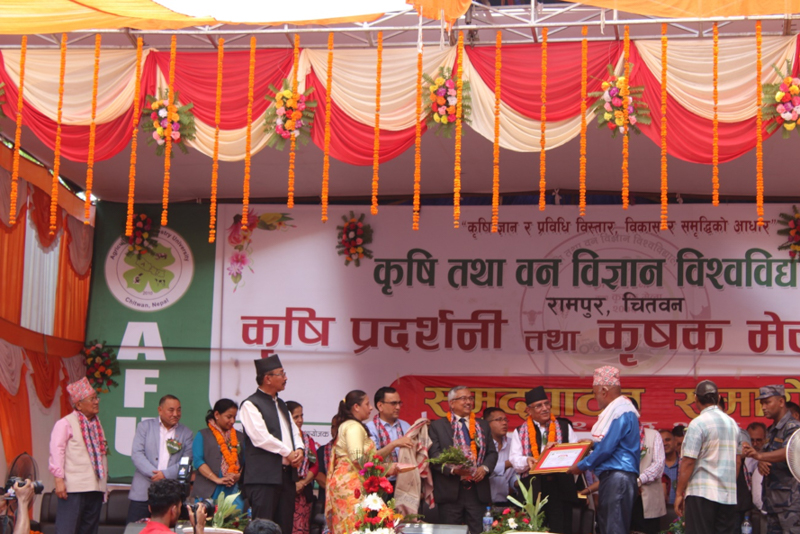 An innovative wheat seed production project in Nepal celebrated astounding growth by bringing some of its most successful farmers to an agricultural fair aimed at connecting people across the entire wheat value chain.

Implemented by the Delivering Genetic Gain in Wheat (DGGW) project based at Cornell, the Innovative Seed Systems at the Agriculture and Forestry University (AFU) worked to enhance capabilities and facilitate quality seed production by smallholder farmers and processing for distribution to more than 1,000 smallholder farmers, and to increase the seed replacement rate by reducing the gap between varietal release and adoption so that the farmers can benefit from the latest technology.

In the first wheat season in 2016-17, the Nepalese farmers involved in the project produced 10 metric tons of quality-certified seeds. In 2017-18 the production increased dramatically to 72 metric tons. And in the final year, through the continuous efforts of the DGGW team, 117 farmers produced 144 metric tons, doubling the amount of wheat seeds in the 2018-2019 season as compared to the previous year.

To recognize the efforts of the most progressive farmers involved in the DGGW project, AFU celebrated the success of seven farmers at the first “Krishi Pradarshani tatha Krishak Mela,” organized by AFU from June 15-18. The farmers — selected from six clusters based on high wheat yields, adoption of newer and better agronomical practices — were honored by former prime minister Pushpa Kamal Dahal, who presented each with a certificate, token, traditional scarf and a flower bouquet. Five of the farmers shared their story in the plenary sessions June 16.

The farmers expressed satisfaction with the trainings and extension support provided by the DGGW team and were very eager to learn best practices and continue to be a part of the project.

“These sort of activities encourage us for further efficiency,” said Ramchandra Adhikari, a farmer in the village of Torikhet located about 150 kilometers from Kathmandu. “I would work with further dedication and will be actively involved in the quality seed production.”

The farmer fair, the first of its kind organized by AFU, connected stakeholders across the agri-value chain, from policymakers to the farmers. During the technical plenary sessions and workshops, farmers and students met with scientists about the latest technologies and best practices in agriculture.

The farmers also explored the latest machinery and techniques available and directly interact with the suppliers in order to enable them to adopt newer methodologies, seeds and machineries to increase their yield and productivity. They could also explore and buy different types of seeds and hybrid plants.

There were 53 stalls set up during the farmer fair, which included ten stalls of agrimachinery, five stalls of seeds and equipment suppliers, 15 stalls by government and non-government organizations involved in agriculture, among others. The fair also had five stalls dedicated to banks and insurance companies and a seminar on crop insurance to increase awareness about agricultural loans and how to take part.

At the DGGW stall, the project team at AFU showcased different activities carried out by the project. The intent was to educate the visiting farmers and students regarding the impact of good agronomical practices adopted and efficient extension work for increasing productivity in the fields. It also highlighted how the students could be a part of the extension work and the how farmers could benefit from the program.

This event served as a wonderful outreach effort and will certainly motivate more farmers from the region to shift to quality seed production in coming years.

DGGW is funded by the Bill & Melinda Gates Foundation and UK aid from the British people.