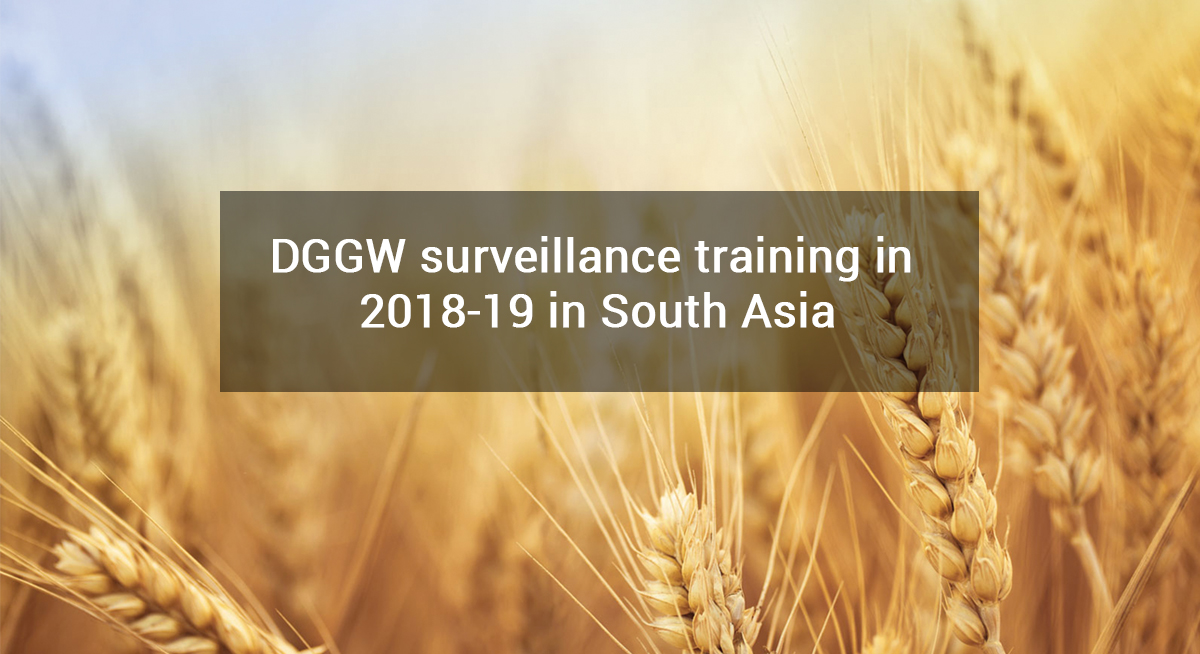 Wheat disease surveillance facilitates the targeted release of rust resistant wheat varieties and/or the withdrawal of susceptible varieties. It has been an essential aspect of the Delivering Genetic Gain in Wheat (DGGW) and Durable Rust Resistance in Wheat (DRRW) projects under the Borlaug Global Rust Initiative (BGRI) ever since the BGRI’s inception in 2008.

Building capacity in surveillance and its tools are important in keeping teams of young scientists up-to-date with new features and apprising them of the importance of proper data recording and management.

Surveillance activities are carried out regularly. For the past six years, scientists have been using Information and Communication Technology, or ICT-based, tools to capture wheat surveillance data in the SAARC (South Asian Association for Regional Cooperation) region. ICT tools enable data sharing on a national and global basis and assist national partners and scientists in analyzing disease trends and impacts on wheat production.

Pre-season training on surveillance and generating valid rust surveillance data with the “SAARC Surveillance Toolbox” is conducted every year before the start of the wheat season in South Asia, and organized by Sathguru Management Consultants on behalf of the DGGW.

In 2018, one-day training programs aimed at improving the use of the rust survey application for surveillance activities were conducted at the Bangladesh Wheat and Maize Research Institute (BWMRI) in Bangladesh 31 Oct 2018, at the Nepal Agricultural Research Council (NARC) on 2 Nov 2018, and at the National Plant Protection Center (NPPC) in Bhutan on 20 Nov 2018.

The Trainers and the Toolbox

Training focused on building the capacity of young scientists and refreshing the skills of older scientists/users with the goal of encouraging participants to collect valid real-time surveillance data. Fifty-two wheat scientists, including pathologists, breeders, senior researchers and agronomists from Bangladesh, Nepal and Bhutan — about 30 percent of whom were women — received training and hands-on experience with the Surveillance Toolbox.

Trainers emphasized collecting surveillance data using the Android device-compatible Rust Survey Application, the importance of collecting data even when no incidence of wheat disease is found (because it is a good indicator of healthy crops), national and global visibility of surveillance records, and the importance of collecting valid data. Participants also learned how to handle any issues with the application before consulting the first line support.

The participants were also given a snapshot of the steps to be followed before, during and after surveillance on-field. Further, country coordinators were briefed on their critical role in driving the activity and ensuring data validity prior to national and global visibility.

In addition to this, a six-day training program entitled “Wheat rust surveillance and monitoring,” is being organized from 5-10 March 2019 in India in collaboration with the Indian Institute of Wheat and Barley Research (IIWBR), in Karnal and Shimla. The program will enable leading global scientists working on rust surveillance and monitoring to exchange information. It will include technical sessions on the principles of plant pathology, biotic stresses of wheat, understanding wheat host and pathogenic variation, rust pathogens, their surveillance and screening for rust resistance, etc. Young scientists and researchers from the South Asian region will participate in the program.

The DGGW project is funded by the Bill & Melinda Gates Foundation and UK aid from the Department for International Development of the UK government.