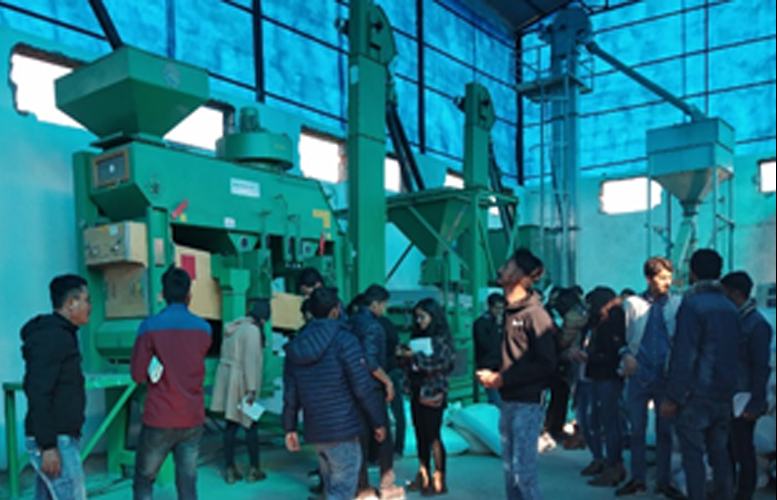 Seeds are the basic inputs in agriculture and often regarded as the carriers of new technology. Particularly in regions like Nepal where modern agricultural inputs and technologies are difficult to adopt due to economic and geographical constraints, seed remains an important means of increasing agricultural productivity. Use of quality seed of improved varieties can increase yields and reduce the risks and uncertainties of climate change and disease and pest pressure. In Nepal, a lot of seed comes from the informal seed sector. Farmers’ saved seed frequently lacks specific characteristics that limit agricultural productivity. Despite 50 years of seed development initiatives, access to good quality seeds in sufficient amounts, at the right time and place is a major constraint in improving the livelihoods of many Nepali farmers. The Seed Replacement Rate (SRR) in Nepal is at 14 percent —one of the lowest in South Asia.

The Agriculture and Forestry University (AFU), Nepal, established in 2010, is the first technical university of Nepal focused on promoting technological advances in the agriculture and forestry sector of Nepal. AFU is responsible for fulfilling the gaps in human resource capacity building in the seed sector.

With the support of the Delivering Genetic Gain in Wheat (DGGW) project supported by the Bill and Melinda Gates Foundation and UK aid from the British people, AFU has initiated an innovative seed system. The objectives were to create awareness of and accessibility to quality certified wheat seed by smallholder farmers in the region by developing a Seed Village Model. The project also focused on supporting capacity building of the farmers and other stakeholders. The seed processing unit and the seed testing laboratory were set up and have been functional at AFU since 2017.

To accomplish the national task of capacity building of human resources, AFU started a Post Graduate Program (M.Sc. Ag) in Seed Science and Technology in 2017 that aims to produce competitive and skilled personnel in Nepal’s seed sector. Four different courses on seed science were developed for this program with academic support from Prof. Sabry Ellias (Oregon State University, US) via F2F program of Winrock International. Apart from this, experts including Dr. P. Subbian, Former Registrar of TNAU, India and Prof. Dr. T.V. Karivaradaraaju, Professor of Seed Science from India, have revised the course for better application in the South Asia context.

The availability of the state-of-the-art Seed Processing Unit (Registration number 44) and authorized Seed Testing Lab assisted via the Seed System in Nepal (DGGW), has contributed to overall seed sector development at AFU and in adjoining areas, and significantly contributed to research and academic activities. These assets have served as important infrastructure in strengthening seed-related activities among AFU students.

The seed testing lab at AFU has been a low-cost, efficient and convenient alternative for local seed producers to test their seeds. It is also a source of income for AFU. Recently, due to increased demand for sample testing from the private sector, in addition to the project funding to upgrade the lab systems, AFU has invested in more seed testing instrumentation.

In addition to the post-graduate course, the processing unit and seed testing laboratory in the Department of Agronomy has provided a stable platform for learning processes involved in seed processing and testing, for undergraduates. During their first and fifth semesters, undergraduates visit a seed processing unit to observe processing techniques. Before the establishment of the seed processing unit at AFU, students had to travel 91 km to Hetauda to observe the processing steps. Having a program at AFU has strengthened the practical education of the students in undertaking several aspects of seed science and technology. Students from the Central Campus at Rampur, Chitwan, and students from constituent colleges of AFU, have visited the central campus to tour the processing unit and seed testing laboratory. The students are also involved in regular project activities like mobilizing farmers and extension workers for seed production, which has helped them gain valuable experience. These activities have strengthened AFU’s academic curriculum and exposed students in the seed sector, resulting in increased human resource capacity in Nepal’s seed sector.

The platform created by DGGW helps sustain the initiative at AFU and contributes to the growth of young agricultural professionals in Nepal.